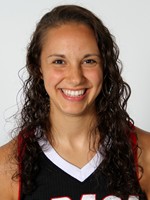 Allison Kauffman, a forward on Grace College’s women’s basketball team, has been named to the prestigious Capital One Academic All-America® Team by the College Sports Information Directors of America (CoSIDA).

Kauffman was one of just five members on the First Team College Division and the only representative of the Crossroads League on either the First or Second Team. The senior forward boasts a perfect 4.0 GPA while studying exercise science.

She leads Grace’s team in both points and rebounds, averaging 17.8 points and 9.0 rebounds per game. Her 13 double-doubles in the regular season were tied for the most in the Crossroads League.

CoSIDA awards student-athletes who have maintained a GPA of at least 3.3. Members of CoSIDA then vote on eligible student-athletes through the district and national levels based on a combination of academic and athletic accomplishments.

Kauffman ranks No. 2 in program history for both career points (1,716) and career rebounds (912). She helped lead the Lady Lancers to a tie for fifth place in the competitive Crossroads League. Grace will play in the 2015 NCCAA National Basketball Championships as the host school from March 18-21. The Lady Lancers can also qualify via the Midwest Regional Tournament, taking on Cincinnati Christian on March 13.