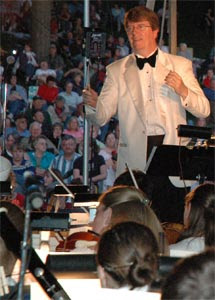 From today’s Warsaw (IN) Times-Union newspaper:

WINONA LAKE – “If music be the food of love, play on!”

Shakespeare knew what he was talking about. Music and love have always been paired together, and will be so at Saturday’s free Symphony of the Lakes performance.

The concert is titled “A Night of Romance,” and the evening will be filled with the romantic sounds of Schumann, Ravel, Smetana, and John Williams’ memorable score from the movie “Star Wars.”

Conductor Patrick Kavanaugh (pictured) is quick to point out: “There’s romance there, too. Princess Lea and Han Solo finally got together, didn’t they?”

The principal work is the “Cello Concerto” of Robert Schumann. And what could be more romantic than having the conductor’s wife, Barbara Kavanaugh, serve as guest soloist? They have performed together many times in their 31-year marriage. This will be the first as soloist and conductor in the Warsaw area.

Barbara and Patrick met in music school, and were married in 1975. For almost three decades, they lived in the Washington, D.C., suburbs, where they raised four boys.

Barbara was one of the top free-lance musicians in Washington, playing dozens of major performances at the Kennedy Center, Wolf Trap, Constitution Hall and at many universities and concert halls on the east coast. She is the director of chamber music for the MasterWorks Festival and teaches private cello lessons in the couple’s home.

While living in northern Virginia, the Kavanaughs and their friends, Jim and Mary Jeane Kraft, founded the Christian Performing Artists’ Fellowship – the ministry that sponsors the annual MasterWorks Festival. This summer festival moved to Winona Lake in 2002. Two years ago the Kavanaughs and the CPAF headquarters moved here permanently.

The Krafts moved here last year. Jim works with Patrick at the Grace College School of Music. Now that both couples live in Kosciusko County, they are all heavily involved in music-making, with the Symphony and the Lakes, the MasterWorks Festival, Grace College and the Second Sunday Series.