Kessler to Retire as Coach of Grace’s Men’s Basketball

After 42 years and over 1,300 games, Jim Kessler is ready to step down. Kessler announced his plans to retire as the head coach of Grace’s men’s basketball team during a press conference on Monday morning.

The legendary coach is currently No. 1 in NAIA Division II among active coaches with over 780 career victories. He has led the Lancers to 10 conference championships over his 42-year career.

Kessler will hand off the reins of the program to longtime associate head coach Scott Moore. Kessler will coach the Lancers for the remainder of the season, climaxing with the NCCAA National Championships which Grace will host from March 13-16.

As part of the transition, Kessler will move to a new role on campus. He will serve as the Special Assistant to the Athletic Director, aiding the athletic department and the alumni office with campus relations.

“I genuinely feel the time has come for me to pass the baton and cheer for one of my coaching proteges Scott Moore. I have run hard and done my best to finish strong, and I am so thankful that Grace College has supported me in this decision,” Kessler said. “I cannot thank my Lord enough for allowing Susanne and me the joy of pursuing a career of coaching and teaching. Few men are so blessed to get paid to do what they thoroughly enjoy. I pray that my career can best be summed up with my life verse in Philippians 3:14. I press on toward the goal for the prize of the upward call of God in Christ Jesus.”

Kessler has directed the Lancers for the entirety of his collegiate coaching career. He began in 1977, and his run of five decades coaching Grace were rewarded with Hall of Fame inductions by the NAIA and NCCAA. 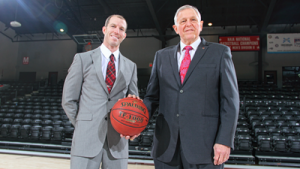 The Lancers had 18 seasons with at least 20 wins under Kessler. His teams qualified for 19 national tournaments including next month’s NCCAA Nationals. In 1992 Kessler guided Grace to the NAIA national championship, the lone NAIA title in school history.

“Coach Kessler has had an immeasurable impact on our basketball program, our campus, the Winona Lake/Warsaw community and the entire state of Indiana. It has been an honor and a privilege to learn from and serve alongside him for 11 years,” said Grace Director of Athletics Chad Briscoe. “Coach K and his family have touched the lives of countless student-athletes, coaches, staff and fans, and he is truly one of the greatest servant leaders in his profession. His desire to impact men for Christ through basketball has built a legacy that will last a lifetime.”

Moore has been an assistant on Kessler’s staff for seven years, dating back to the 2012-13 campaign. The Lancers have won 20 game in four of those seasons and reached the semifinals of NAIA Nationals in 2013.

Moore was a point guard for the Lancers from 2004-08 and ranks sixth in program history with 555 career assists. He also coached Grace’s women’s tennis team from 2013-16 and was named the Crossroads League Coach of the Year in 2016.

“This is something I’ve dreamed about ever since I was a freshman in high school, and I am extremely grateful that the Lord has blessed me with an opportunity to coach basketball at my alma mater,” Moore said. “Thank you to Dr. Bill Katip, Coach Briscoe and the administration for believing in me and trusting me to run this program. And thank you to Coach K for mentoring me, loving me and giving me this opportunity. I am very honored to become the next head coach at Grace.”

Briscoe added: “Scott has demonstrated a heart for impacting young men for Christ through basketball and is passionate about the mission of Grace College. This is a natural transition for the program as Scott has been invested as a player, alumni and coach for many years. He brings a strong knowledge and understanding of what it takes to recruit in the Midwest, and he is very focused on his vision to continue the legacy of this program. We look forward to his continued leadership and commitment to pursuing Christian excellence in every aspect of the Grace men’s basketball program.”

To follow along with Kessler’s final games as the coach of the Lancers, visit gclancers.com/nccaa for information about the NCCAA National Championships, hosted by Grace.