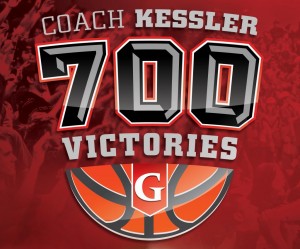 Kessler became just the 45th coach in the history of men’s college basketball to reach the 700 plateau, earning all 700 wins in his 38 seasons at Grace.

“This was never something I intended to get when I first started coaching. My goal as a coach is to go out and find good kids who can also play basketball,” said Grace head coach Jim Kessler. “It’s fun to be the 45th coach in history with 700 wins, but the trick is to be on the right bus and with the right people. I’ve been very fortunate here at Grace. I want to be found faithful and serve the Lord in my role, and it’s been a privilege to work at Grace.”

Four players scored in double figures for Grace, led by 18 points in 22 minutes from Brandon Vanderhegghen.

The Lancers (1-0) started slowly and trailed for most of the opening 10 minutes against the Cardinals. But Grace charged in front for good with a definitive 22-6 run over the final 9:18, claiming a 39-26 advantage at halftime. Chad Hoffer scored six of his eight points during Grace’s run, and Drew Perrin added five more in that span.

In the second half, Concordia managed to trim Grace’s lead to single digits on a few occasions, but each time Grace had a response. The Cardinals came within 59-52 with 9:30 to play, but the Lancers countered with a flurry of points. Grace erupted for 12 points in less than three minutes to balloon its lead back up to 17. Vanderhegghen had half of Grace’s points in that run.

Despite 20 turnovers, Grace’s offense operated at a high efficiency by shooting 58 percent for the game. The Lancers made 18-of-29 (62 percent) from the floor in the second half. Concordia, on the other hand, connected on 40 percent of their field goal attempts, including 6-of-25 from the 3-point line.

The Lancers continue their home Crossroads Classic on Saturday with an 8 p.m. game against Andrews at the Manahan Orthopaedic Capital Center. A ceremony honoring Kessler’s milestone will take place before Saturday’s game.