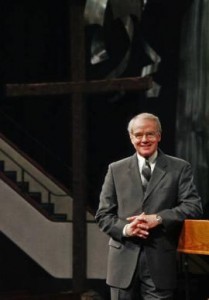 Grace graduate and former Grace Brethren pastor Knute Larson (pictured), by the relationship he formed with an African American pastor, provided the model that has led to the giving of awards for good works. Love Akron will be honoring several, referencing Larson as part of the inspiration for the movement. Here is a short excerpt–to read the entire article click here.

Larson, a white pastor, and Fowler, a black pastor, developed a relationship that promoted unity by breaking down the walls of race, culture and denomination. Their friendship became known as an “allies” relationship that served as an example to the members of their respective congregations — The Chapel and Arlington Church of God — and the community at large. . . With Unruh, Fowler and Larson in mind, Love Akron created two awards to be given annually to recipients who exemplify Larson and Fowler’s “allies” spirit of unity and Unruh’s servant leadership. The awards will be presented at the first annual Love Akron Breakfast at 7 a.m. Sept. 25 at the Quaker Station. The inaugural event will feature Fowler and Larson, co-founders of Love Akron, as keynote speakers.