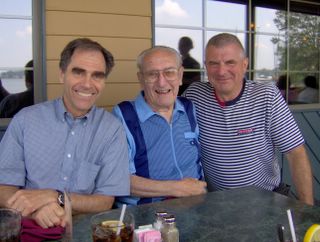 Arnold Kriegbaum, center, returned today after a 20-year absence to visit Winona Lake, Indiana. Kriegbaum was editor and business manager of the Brethren Missionary Herald Company from September 1953 to August of 1961, when he left to become Dean of Students at Grace College and Seminary. The current Herald building, at 1104 Kings Highway in Winona Lake, was built under his direction in 1956 and it housed all the Grace Brethren national organizations for some years.

Kriegbaum and his wife, Laura, now live with their daughter, Karen, and her husband near Indianapolis, Indiana. Also with Kriegbaum today were his two sons. Richard, at left, is director of United Way in Fresno, California, and Ward, at right, is an administrator at Wheaton College in Illinois.

Kriegbaum, now in his 90s, wanted his friends in Winona Lake to have his apology that because of limited time and his wife’s frail health, he was unable to stop and see many of his friends and co-workers from days past.