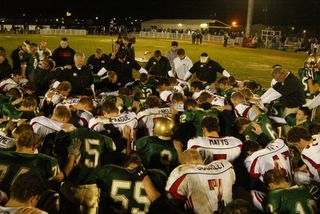 Another step for G.B. Lancers continue to have success at every level
By Erik Boal, Special to the Daily News

From a team that lost by a combined 100 points in 8-man first- round playoff games in 1996 and 1997 to one that captured the school’s first 11-man championship last season, Gourley has seen the Lancers evolve into one of Southern California’s top small-school programs.

Gourley, a four-year varsity player, also knows how few people are aware of Grace Brethren’s accomplishments under the guidance of his father, athletic director and head coach Terry Gourley.

“We’re the team that no one believes in,” said Steve Gourley, the top defensive player in Southern Section Div. XII last season.

Despite competing in four divisions the past five seasons, Grace Brethren (10-2) – which debuted this year in Div. XI – is among five Southern Section teams playing in its fifth consecutive semifinal, joining Oaks Christian of Westlake Village, Mission Viejo, South Hills of Covina and St. Bonaventure of Ventura.

The Gourleys relish the underdog role. It has suited them well.