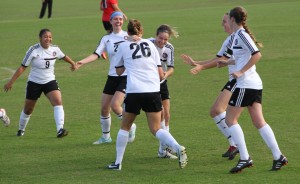 Mallory Rondeau (center) celebrates her first-minute goal on Wednesday with (left) Kaitlyn Hayes, Meredith Hollar, Meredith Matson, Holly Bennett, and Carianne Sobey as they played to a 3-0 victory over Mid-America Christian Wednesday at the NCCAA semifinals.

Grace College’s women’s soccer team put in its second straight dominating performance on Wednesday with a 3-0 victory over Mid-America Christian to close out pool play at NCCAA Nationals.

“We met our objectives going into [today’s game]. We definitely wanted to win 3-0 and put ourselves in prime position for the No. 1 seed. As far as our playing, we could’ve been a little more polished, but we scored early and it’s good. I thought we were very threatening in attack and really got after it,” said head coach Michael Voss. “We’ve been enacting this plan all year long in trying to get through a national tournament. We’re excited to be there, and we’re going to attack it like we want to win it.”

Grace shocked Mid-America Christian with a goal in the first minute of play on Wednesday. Kaitlyn Hayes found Rondeau open through the Evangels’ defense. Rondeau beat the goalkeeper with ease for a goal just 21 seconds into the match.

Ten minutes into the match, Grace thought it had scored again. Hayes picked out Meredith Hollar behind the backline, resulting in another one-on-one situation with the goalie. Hollar poked her shot under the charging goalkeeper and into the back of the net, but her goal was waved off for offside.

Minutes later, another strong buildup from Carianne Sobey and Rondeau resulted in a left-footed shot by Hayes that whisked just wide of goal.

Grace continued to assault MACU’s net, tallying nine shots before halftime. The Lady Lancers eventually found their second goal off a penalty kick. Rondeau was pulled down inside the penalty box and was awarded a PK. She completed her first-half brace in the 24th minute on the ensuing kick.

The half ended with the Lady Lancers leading 2-0. Grace held a 9-4 advantage in shots.

In the 67th minute, Grace made the score 3-0. Sobey beat a defender on the right endline and centered a pass in the box to Kaitlan Wiles, and Wiles slotted her 12-yard shot inside the left goalpost.

With 19 minutes remaining, Grace nearly struck again. Hollar squared a pass to an open Sabina Meyers in front of goal, but Meyers’s first touch was too heavy which allowed MACU’s goalkeeper to make the save.

Grace is advancing to its second consecutive NCCAA Semifinals after outscoring its opponents 7-0 in pool play. Grace also sits two wins away from breaking the program record for most wins in a season (17-5-3 in 2012).