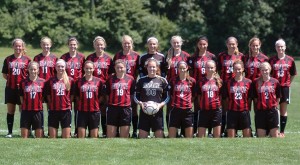 A dominant display from Grace’s women’s soccer team on Wednesday propelled the Lady Lancers to a 4-1 win over Judson, securing Grace a spot in the NCCAA National Semifinals.

The Lady Lancers (12-6-3) will take on Dallas Baptist on Friday at noon. Watch live (http://client.stretchinternet.com/client/tourbeau.portal) or follow on twitter (https://twitter.com/GCLancers) for updates.

With a victory, Grace will take on the winner of Azusa Pacific and Point Loma Nazarene in the championship on Saturday at 1 p.m.

Mallory Rondeau scored two goals to highlight the Lady Lancers’ effort, and Emily Hickerson and Carianne Sobey each had a goal and an assist.

“The women really took control today. It was good to see them spread it out and finish,” said Grace head coach Michael Voss. “There were lots of positive adjustments today from the women.”

Grace was aggressive offensively from the kickoff. Early shots from Rondeau and Jordan Hairgrove forced Judson’s goalkeeper to make deflected saves in the first minutes. Rondeau was first on the score sheet soon after in the ninth minute, finishing a low cross from Sobey.

The Golden Eagles (12-8-2), who were ranked in the NAIA for much of the regular season, responded almost immediately with the equalizer 20 seconds later.

Emily Hickerson scored the eventual game-winning goal in the 22nd minute. Rondeau provided a beautiful diagonal pass to Hickerson in the penalty box, and Hickerson took a quick touch and chipped the charging goalkeeper.

Hickerson returned the favor seven minutes later, allowing Rondeau to double Grace’s advantage. Hickerson led the Lady Lancers’ attack down the left side of the field and crossed to Rondeau who hit a one-time rocket into the net.

Rondeau was involved in Grace’s fourth goal as well as Judson tackled the sophomore in the penalty box. Sobey buried the ensuing penalty kick in the 53rd minute to all but secure the victory.

Grace’s possession took control of the remainder of the contest, limiting Judson to two shots after halftime.

Jackie Seal had a well-placed shot saved by Judson’s goalkeeper, and Rondeau was denied a hat trick by the left goal post in the 78th minute.