Lady Lancers Lead Pack After Day One of NCCAA 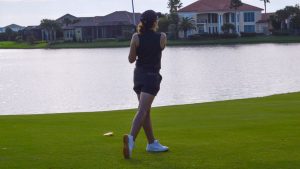 PALM COAST, Fla. – After the opening day of the 2019 NCCAA National Championships, Grace College’s women’s golf team found itself atop the standings.

The Lady Lancers fired a round of 319 at the Hammock Beach Resort’s Ocean Course, nine strokes ahead of second-place Campbellsville.

Grace’s round set a new program record for lowest team score during a championship event (NCCAA or Crossroads League), beating the previous best round by five strokes.

“We are happy to have gotten off to a good start, but there are 36 holes yet to be played,” said Grace head coach Denny Duncan. “There are a lot of good teams here. We will need to play well.”

Three Lady Lancers ended the day in the top 10 in the field. Freshman Lucy Young fired a 76, good for second place and two strokes out of the lead.

Sydney Abbott’s 78 was tied for fourth, and Carolyn Pacocha’s 80 was eighth-best in the opening round.

Rachel Harvey was Grace’s fourth scorer at 85, tied for 12th place on the individual leaderboard, and Anna Marshall carded an 88.

The tournament continues with 18 holes on Tuesday and the final round on Wednesday.