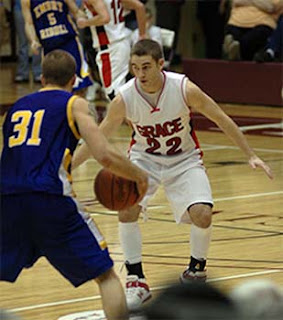 The Grace College Lancer men’s basketball team advanced to the round of sixteen at the 17th annual NAIA Division II Men’s Basketball National Championships by defeating #14 Embry-Riddle (Fla.), 75-65. (See photo at right.) The tournament is being held this week in Branson, Mo.

The Lancers return to action Friday night against Morningside College at 5:45 CST. Morningside was ranked #1 in the nation for nearly seven weeks this season. For more information about the upcoming game and photos from last night, click here.

On Saturday, Worthington Christian (26-1) goes up against New Knoxville (26-0) in a 2 p.m. EST game at the Value City Arena in The Ohio State University’s Jerome Schottenstein Center.