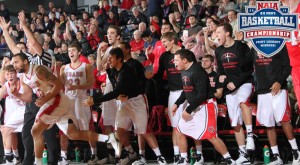 The Lancers were the second-to-last bubble team to receive an invite to the tournament, earning the seventh of eight at-large bids to the 32-team field.

Grace, who was ranked No. 24 in Wednesday’s NAIA poll, will find out its first-round opponent tonight at 9 p.m. in the live selection show at www.NAIAnetwork.com.

Grace enters the tournament with a record of 21-10 although the Lancers have dropped three straight. Grace’s last appearance at NAIA Nationals resulted in a run to the national semifinals in 2013. This year’s tournament will make six trips in eight years to NAIA Nationals under head coach Jim Kessler.

“This trip is a gift based on the body of work for our season. To win 11 games in this league is hard, and making NAIA’s is a tribute to how this team dug and clawed all season,” Kessler said. “Sometimes you go to this tournament with too high expectations and play tight. This year we will be going with great appreciation and without pressure as the underdog, similar to how we did two years ago when we made it to the semifinals.”

The Crossroads League will be well-represented at the tournament with four teams in the field – Grace, Indiana Wesleyan, St. Francis and Bethel. Only two other conferences in the nation had four qualifiers.