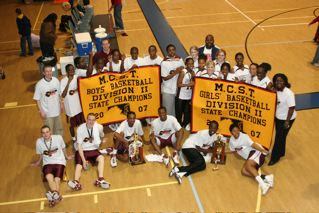 The Lanham, Maryland, Christian School, a ministry of the Grace Brethren Church of Lanham, achieved the double pleasure this past weekend of state championships for both the Boys and Girls Basketball teams!

The MCST (Maryland Christian School Tournament) Division II saw the Lanham Lions appearing in the Final Four for the first time in its history.

Lanham Christian School is celebrating its 30th year of ministry. Gene Pinkard is Headmaster of the school and Paul Mutchler pastors the Lanham church.