Larry Poland to Return to Grace as Chapel Speaker 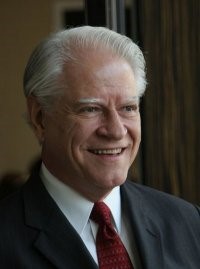 WINONA LAKE, IND. – After thirty-two years consulting with power brokers in the entertainment industry in Hollywood and New York, Dr. Larry Poland, Chairman and CEO of Mastermedia International, will be sharing his insights in two chapel programs at Grace College, Thursday and Friday of this week, February 16 and 17. “Is there any hope of Hollywood?” is Dr. Poland’s Thursday topic and “Media’s Destructive Impact” will be the focus on Friday.

Poland grew up in Winona Lake, attended Warsaw High School in the class of 1957, was student body president, a foreign exchange student, and brought Warsaw High a championship in the National Forensic League national student congress competition. He received his undergraduate education at Wheaton College in Illinois and received graduate degrees at Grace Seminary and Purdue University

After beginning his career as an administrator at Grace College, Poland became the nation’s youngest college president in 1967 when he took the helm of Miami Christian College. He moved away from higher education in 1973 and headed an international volunteer service agency placing 800 volunteers in 35 nations in eight and one half years. He was listed in Harvest House Publishers 365 Most Influential People in the World based on his relationships with global media leaders. He is returning to the campus of his alma mater, Grace Theological Seminary, where he was Alumnus of the Year.

It was 1979 when Poland began a quiet, one-on-one strategy to build relationships with those who control power in global media. His aim was to help media decision makers understand the 100 million evangelicals in America and to present the message of the Christian faith.

Dr. Poland lives in Redlands, California, has six children and nine grandchildren, and will celebrate his fiftieth anniversary to his wife, Donna Lynn, this year.

Chapel programs at Grace College are held at the Orthopaedic Capital Center on Wooster Road in Winona Lake at 10:30 a.m. and are open to the public.