Tuesday, July 26 was the last full day of the Fellowship of Grace Brethren Churches national conference, being held in Wooster, Ohio. The final meetings of the conference will be an 8:30 a.m. brunch and FGBC business meeting Wednesday morning, and a final address by Ohio Pastor Jim Custer at 10:30 a.m. 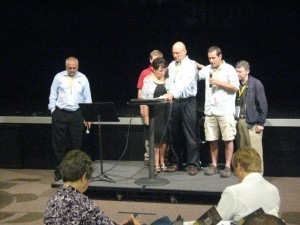 Tuesday’s schedule began with a breakfast sponsored by G02 Ministries in which executive director Tim Boal gave updates on church planting and a number of church planting pastors gave testimonies. Following a full slate of seminar offerings at 9 a.m., the 10:30 a.m. general session featured Pastor Jim Brown of Goshen, Indiana, as the speaker.

Among the featured church planters were Daniel and Teressa Pierce (pictured), who are planting a Grace Brethren church in Greensboro, North Carolina. Tim Boal is at left and surrounding the Pierces and praying for them are pastors of the Blue Ridge District.

The Association of Grace Brethren Ministers had a luncheon meeting, followed by network meetings, and an evening meal function at which the Grace Brethren military chaplains were honored. Larry Chamberlain and John Schumacher of the Eagle Commission conducted that meeting, and a number of chaplains from several branches of the military service gave updates and testimonies. The speaker for the evening session was Pastor Stephen Joyce from Washington, D.C., who spoke on “A Vision for the City.”