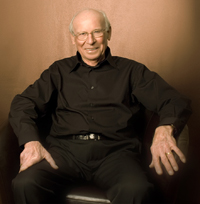 Lester Pifer, who led church-planting efforts in the Charis Fellowship (Fellowship of Grace Brethren Churches) for more than 30 years, died around Noon on Christmas Day in Central Ohio. From 1953 until his retirement in 1985 from Grace Brethren Home Missions, he traveled throughout the country, often piloting the Home Missions plane (in the early days) in order to reach more remote areas easily. He once told a reporter, his “greatest joy was to see Grace Brethren churches planted and growing, the salvation of souls, and building new people up in the faith.”

Upon his retirement, he moved to Florida where he began a church in Bradenton. When his wife, Genny, was diagnosed with cancer, they moved to Columbus, Ohio, to be near family. He continued to be involved in ministry as part of the staff at Grace Polaris Church, where, after Genny’s death, he met and married Bonnie Howard.

Funeral arrangements will be posted when they are available.