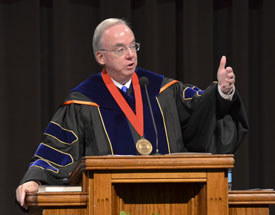 Rainer, speaking at a chapel service in Union’s G.M. Savage Memorial Chapel, read a letter from Selma Wilson, president of LifeWay’s B&H Publishing, in which she told him of the HCSB Award committee’s decision.

“The award recognizes biblical fidelity and an extraordinary commitment to teaching and preaching the Word of God,” Wilson wrote. “Our committee is highly selective in making this award. We have waited over four years before naming the second recipient of the HCSB Award.”

The first HCSB Award was given posthumously in 2009 to Fred Winters, pastor of First Baptist Church in Maryville, Ill., who was shot and killed during a worship service.

Wilson said the award committee “recently evaluated several incredible leaders” as potential recipients of the HCSB Award, but that Dockery’s name rose to the top.

“His books on biblical authority and interpretation are seminal works,” she wrote. “His speaking and proclamation of the Word is uncompromising and challenging. His academic and statesman leadership is known around the world and admired by thousands.”

Dockery said the recognition was “incredibly humbling and most meaningful.”

“When Dr. Rainer made the announcement today, I was both completely surprised and quite overwhelmed,” Dockery said. “I am deeply honored by this recognition, and I want to express my genuine appreciation to Dr. Rainer and all of those at LifeWay who were involved in this decision.”

The recognition comes with an HCSB Bible, a plaque and a monetary award. LifeWay will formally present Dockery with the award during the Southern Baptist Convention’s annual meeting in Baltimore in June.