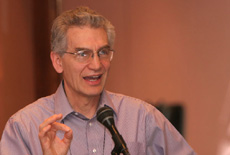 Sherwood Lingenfelter, chairman of the board of Grace Brethren International Missions, recently spoke and participated in a national meeting to assess short-term mission activities. A portion of an explanatory article is reproduced here-to read the entire article click here.

Lingenfelter has co-authored a book on training leaders for a national church-planting movement with Dr. Bobby Gupta of Chennai, India. The book, entitled “Breaking Tradition to Accomplish Vision,” will appear from BMH Books later this month.

Leaders from theological seminaries, youth ministries, mission agencies, and missions-minded churches convened January 9-11 at an annual national forum to ask difficult questions about whether short-term mission trips are effective. The National Network of Youth Ministries convened over 80 Christian leaders for the 2006 Youth Missions Forum Network at the Crowne Plaza Hotel in Orlando, Fla.

“We’ve got a million trips, but is it missions?” asked Sherwood Lingenfelter, provost of Fuller Theological Seminary in Pasadena, Calif. “We’ve made very little significant impact.”

Four years ago, NNYM launched the Youth Missions Network to develop a coalition of U.S.-based denominations and organizations involved in international and cross-cultural youth missions to work together on issues that confront the American church and are larger than the scope of any one group. Today, over 75 groups are a part of this coalition.

The special forum hopes to stimulate dialogue about youth mission models. It convenes amid a slew of similar forums in Orlando addressing urban ministry and youth ministry – all organized by NNYM. The network represents close to 20,000 ministries.

During the forum at the Crowne Plaza Hotel, attendants pointed out that most of the students who went on the short-term mission trips don’t commit to long-term missions.

Case in point is Lingenfelter’s short-term missions project in Chad in 1997. The ministry he began didn’t spread to the local ministries. And he doesn’t know if the Africans they reached for Christ during the trip were ever incorporated into the local church community. In addition, only one out of a team of eight went into long-term missions.

He suggested that more students might have become missionaries if he had only followed up with them after the trip.

“The vision wasn’t shared, and that was a mistake,” he said. “I was focusing on programs rather than disciples, and when it was done, I thought it was done.”

Lingenfelter said he failed to partner with the local initiatives already in place.

“People have a passion and a vision for their own people, but they get ‘I think it’s important to partner with what God’s already doing, not try to start something on your own. We think we’re the Americans and we have all the answers.'”