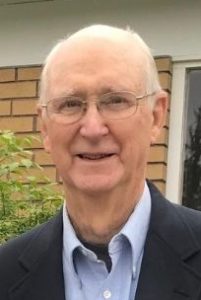 Pastor Ralph Roy Schwartz was born on December 14, 1937 in Hatfield, Pa., and went to be with his heavenly Father on Saturday, July 25, 2020 at 5:05 a.m. in Salem, Ore. Ralph was the 3rd son of Daniel and Dorothy (née Light) Schwartz; his brothers are James (deceased), Donald, David, Daniel, Gordon, and Gerald (deceased). Ralph was preceded in death by his son, Terry (1988), and is survived by his faithful wife and ministry partner of 61 years, Martha (née Frady); four children and their spouses: Sharon Ogden (and husband Ray), Curtis (and wife Susan), Elza Ownbey (and husband Vincent), and Samuel (and wife Tracey); eight grandchildren: Christina, Elise, Stephen, Charles, Austin, Miranda, Caleb, and Ema; and eight great-grandchildren: Claire, Raegan, Esther, Myra, Evelyn, Mable, Bentley, and June.

Ralph was raised in Hatfield, Pa., and studied at Bob Jones University (Greenville, S.C.) where he met and married Martha (from Long Beach, Calif.). Having set their hearts on sharing the love of Jesus with the nations, further studies took them to Biola School of Missionary Medicine (Los Angeles, Calif.), and Grace Theological Seminary (Winona Lake, Ind.). Ralph and Martha served in gospel ministry in Belem, Brazil (1964-1977 – Encompass World Partners), in Santa Maria, Calif. (1980-1991 – Grace Brethren Church), in Porto, Portugal (1991-2003 – Encompass World Partners), and in their retirement in Salem, Ore. (2003-present –serving as members of Kingwood Bible Church and leading Vespers committee at Capital Manor).

During his sickness in the final months of life, Ralph was showered with prayers and greetings of love from around the world in honor of his faithful and dedicated service to God. Ralph was known for his gentle spirit, genuine love for people, and tireless service with his heart, mouth, and hands. He will be deeply missed by his family and remembered by the thousands of people whose lives he touched during his lifetime.

In lieu of flowers, the family supports Kingwood Bible Church’s desire to effectively stream services each week online. You may direct donations in Ralph’s memory to the Technology Capital Campaign Fund at Kingwood Bible Church, 1125 Elm Street, NW, Salem, Oregon 97304. Online gifts may be sent to Give at kingwoodbible.net by selecting  Capital Campaign or clicking on kingwood.churchcenter.com/giving/to/capital-campaign. Thank you so much for all the love you have poured into our family at this time of parting.