Live Life on the Edge 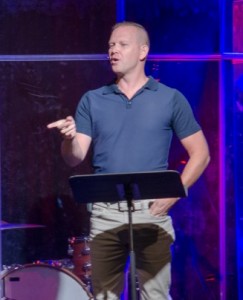 Bartley Sawatsky, executive of the Fellowship of Grace Brethren Churches and pastor of Grace Community Church, Mississauga, Ontario, led off the conference on Thursday evening, asking, “Will You Flinch?”

Flinch Conference 2015 ended Sunday, July 26, with a challenge to live life on the edge. Ed Lewis, executive director of CE National, encouraged attendees at the final celebration of the national conference of the Fellowship of Grace Brethren Churches (FGBC) to take risks for Jesus in their daily lives.

It was the culmination three days of worship, fellowship, and inspiration while learning new ways to do ministry. Held July 23-26 at the Newark Liberty International Airport Marriott in New Jersey, the conference included speakers such as Alan Hirsch, Caesar Kalinowski, and a variety of Grace Brethren pastors and ministry leaders.

As Lewis concluded, Bartley Sawatsky, executive director of the FGBC, took the platform. He invited the audience to the front to take one of five wrist bands. Each had the hashtag, #myflinchrisk, imprinted on it. There were five colors, each representing a type of risk. 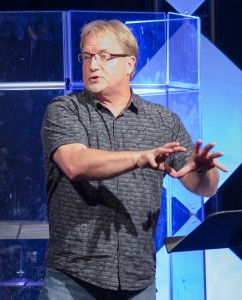 Participants were asked to commit to taking a risk for Christ, then share that experience on social media using the hash tag. All #myflinchrisk posts will appear on the #myflinchrisk wall at graceconnect.us.

A video of Lewis’s talk, along with recordings of other conference speakers, may be found at vimeo.com/channels/ flinch2015.

The annual business meeting, led by executive director Bartley Sawatsky and FGBC conference coordinator Tom Avey, was the final activity of the conference.

Both SeedNet and Grow New England are focused on church planting. 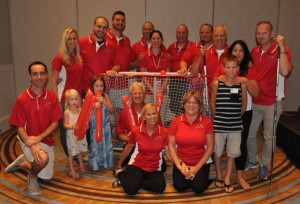 The Grace Brethren from Canada were well represented.

Kalahari Youth Retreat is an annual winter gathering held at an indoor water park in Sandusky, Ohio. It regularly at- tracts more than 2,000 students and adults. It is led by Zach Pinkerton. (See kalahariretreat.com.)

Resolutions from the Social Concerns Committee, which have been annually ratified for decades, were approved for placement into the Manual of Procedure. This includes resolutions addressing societal issues from the standpoint of biblical values and will be communicated to local churches. They may be found online at fgbc.org/page/resolutions2015. 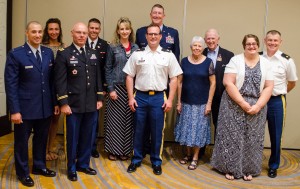 Military chaplains (and their wives) were recognized at the Grace Brethren Investment Foundation/Eagle Commission dinner on Thursday.

Clancy, the pastor of Marysville Grace, a Grace Brethren congregation in Marysville, Ohio, will form and cast vision for the Fellowship; lead the executive team and Fellowship Council; attend Focus Retreats; champion church-planting, leadership training, and integrated ministry; and take the lead in FGBC-wide communication. As conference director, Keith will plan and implement the annual FGBC Vision Conference (national conference); facilitate meetings, such as the Enduring Visional Leadership Community (which includes church planting, leadership development, and integrated ministry) and the national ministry leader’s meeting; and attend meetings of young leaders and GoNet as a representative of the executive team and FGBC.

Jeremy Wike, Ron Boehm, and Scott Avey were each elected to five-year terms on the Fellowship Council, the board that oversees much of the operations of the FGBC.

The next national conference for the Fellowship of Grace Brethren Churches will be held July 22-25, 2016 in Toronto, Ontario.

This article first appeared in the Fall 2015 issue of GraceConnect. If you’d like to receive the magazine, mailed directly to your home at no charge, click here.