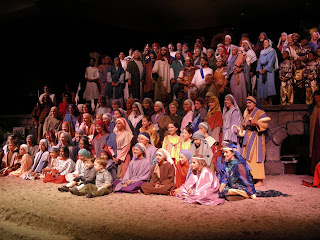 Cast members of the Living Christmas Trees pageant at the Grace Brethren Church, Columbus, Ohio, pause for a photo after the afternoon performance on Sunday, December 9. The 21st annual production opened this weekend at the church’s Worship Center. It includes music performed by the church orchestra, choir, and ensemble and involves a cast of nearly 200 people in addition to hundreds of behind-the-scenes volunteers. After a two-night break, the pageant continues Wednesday through Sunday nights (with matinee performances on Saturday and Sunday afternoons). For more information, click here.

David Plaster is the senior pastor at Columbus. The concert is directed by Randy Kettering, director of arts and media, and David P. O’Roark, director of drama ministries.