Living in the Liminal Zone 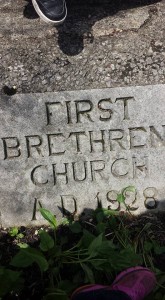 Jonathan Carey, the pastor of the Ellet Grace Brethren Church on the southeast side of Akron, felt a nudge. He began wondering what this could mean for his congregation.

The Ellet church has been meeting in the Akron suburb for more than 90 years. It was home to the first classes of Grace Theological Seminary. It has birthed pastors and missionaries. It had a viable ministry in its community, particularly with the elementary school next door.

Even so, it has had its struggles in recent years. “We were doing a lot of good things, but not getting traction,” Carey admitted. Their building, built in the early 1920s, was not handicap accessible nor was it air-conditioned. The foundation was rotting, creating problems in the basement. The heating system needed replacing.

He began to consider the idea of merging with the Grace Church – a growing Grace Brethren congregation led by Bogue with multiple campuses around the region. “They are doing such great work on the west side of Akron. Why wouldn’t we want to partner with that?” said Carey.

The two pastors met at Flinch Conference to explore the possibilities. Later in the summer, during a discussion with his elders, Carey broached the topic.

With the support of the elders, Carey approached the Ellet congregation. In February, Bogue met with them to discuss the possible merge. The response was a 93 percent approval vote allowing the church to move forward as a campus of Grace Church.

“I never been so sure of God’s leading in something than I have in this,” noted Carey as he recalled seeing God’s fingerprints in the process. “This is the best thing for the community, for the church, and for me,” he added.

For Bogue, this was a huge opportunity. “Our goal is to adopt, merge, or plant 30 church locations. Our church has five locations [now]. We are excited; they are excited. [We] are grateful for this opportunity.” Since the vote, a series of decisions have been made that will effect both congregations.

A new location or building will be established for the new Ellet Campus of Grace Church. In the interim, the church will meet in a temporary facility, possibly the Ritzman School next door. Carey stepped down as the pastor of the Ellet church after Easter Sunday but remains on the staff of Grace Church in another role.

Staff from Grace Church is leading the Ellet congregation in a discussion of their vision and mission, as they explore what God wants next in their community. Gary Underwood, who has led Grace Church, a Grace Brethren congregation in Delaware, Ohio, for nearly 12 years, will become the campus pastor in mid-July. Some people who already attend Grace Church campuses in Bath or Norton, but live in the Ellet area, will be encouraged to be involved in the campus, which will relaunch next year.

At last year’s Flinch conference, Carey took the challenge to live in the liminal zones. (Speaker Alan Hirsch defined liminal spaces as those moments of transition that involve adventure, risk, journey, engagement, and courage.) Since then, he’s been wearing a red wristband as a reminder.

“I really appreciate the tie to the Fellowship [of Grace Brethren Churches],” he said. “[I like] seeing how God has worked through the Fellowship to make this change.” — by Grace Beight

Grace Beight was an intern at GraceConnect during spring semester 2016. A native of Amherst, Ohio, she graduated from Grace College in May.