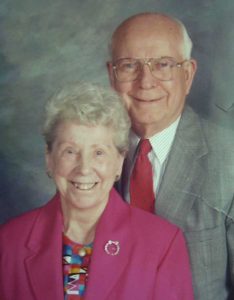 Born and raised in Chicago, Ill., she attended and graduated from Moody Bible Institute with a major in Christian Education. She used her training to train the women where she and her husband, Lynn, served, as well as, homeschooled their children, Norman and Becky.

She met Lynn Daniel Schrock at Moody, and they were married on September 4, 1943.

Lynn graduated from Grace Theological Seminary in 1945 and the couple immediately went to Argentina as missionaries with the Grace Brethren Foreign Missionary Society (now Encompass World Partners). They served there until 1969

In 1970, they moved to San Diego, Calif., where Lynn was the pastor at the Grace Brethren Church. They retired in 1985 and moved to Bradenton, Fla., were they helped start a Grace Brethren church.