A Long Beach, Calif., firefighter who was shot last Monday while responding to a call at a retirement home had attended several Charis Fellowship churches in the Long Beach area and reportedly was a graduate of Brethren Christian High School, which was founded by Grace Brethren congregations in the Long Beach area. A public service for Capt. David Rosa will be held Tuesday at the Long Beach Convention Center. A portion of a story from the Long Beach Press-Telegram appear below. Click here to read the complete article. 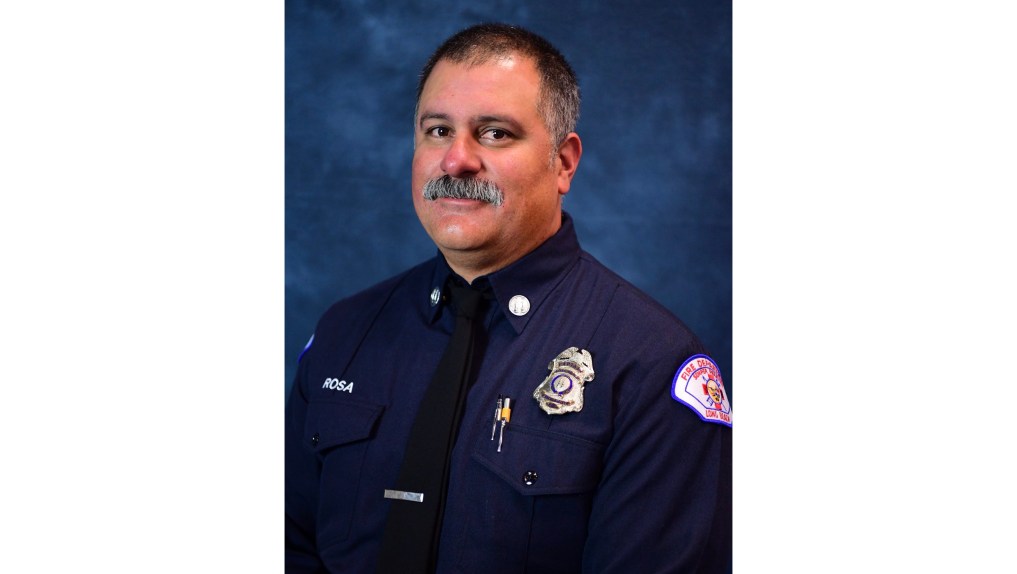 The public will be able to honor fallen fire Capt. David Rosa during a Tuesday memorial service at the Long Beach Convention Center.

The 10 a.m. service will be held in the complex’s arena at 300 E. Ocean Blvd., said Jake Heflin, the Long Beach Fire Department’s spokesman. A reception will follow.

JetBlue is offering free flights to firefighters from afar who want to attend the memorial. The flights can be booked by calling 1-800-JetBlue, spokesman Philip Stewart said. Fire personnel are asked to wear Class A dress uniforms and all incoming fire department resources, dignitaries, honor guards, and members of the Pipes and Drums corps are asked to RSVP at lbfdmemorial.org.

Rosa, 45, was gunned down Monday while responding to an explosion at a senior apartment building in downtown Long Beach.

He and two others were shot on the second floor of the Covenant Manor apartments, responding to an explosion that blew out windows. Thomas Kim, 77, has been charged with murder and other counts for the incident, which prosecutors say was an attempted murder-suicide Kim planned targeting a woman upstairs with whom he was feuding.

Another firefighter was grazed, and a third victim was hospitalized; that person’s condition has not been publicly released.

Rosa is survived by his wife, Lynley; two sons, Alec, 25, and Samuel, 15; his parents, Paul and Jean Rosa; and a sister, Julia Hensley. A donation fund was created to benefit his wife and children.

Rosa was a 17-year veteran of the Long Beach Fire Department, serving as a captain since 2011. Prior to his promotion, he was a firefighter and paramedic at some of the busiest stations in the city. He also served as a training captain, teaching recruits and firefighters. Rosa was most recently assigned to Station No. 10 in central Long Beach.

“Captain David Rosa was a well-respected fire officer. He served as a mentor for many young adults, paramedics, and firefighters.  He was dedicated to his faith, his family, and to his profession,” the Long Beach Fire Department said in a statement Thursday. “Captain Rosa’s tragic death has left us deeply grieved and saddened. This loss is profound and has been felt by all members of his fire family and the community he served with dedication and distinction. Our hearts, prayers, and condolences go out to his family and friends.”

Among speakers at the memorial will be Todd Rodarmel, pastor of Mountain View Church in San Juan Capistrano, the city where the Rosas family lives. The Rosas began attending the Christian church three or four years ago, Rodarmel said, and their families became tight.

Sam got the news about his father shortly after leaving for a trip to Shasta Lake with a youth group from the church, Rodarmel said. Firefighters pulled their van over to bring him to the hospital.

“Everybody’s been very broken about it,”  Rodarmel said. “He was that kind of guy that all the kids loved.”

Also see Veteran Long Beach fire captain is gunned down while responding to explosion at retirement home; 2 others wounded.