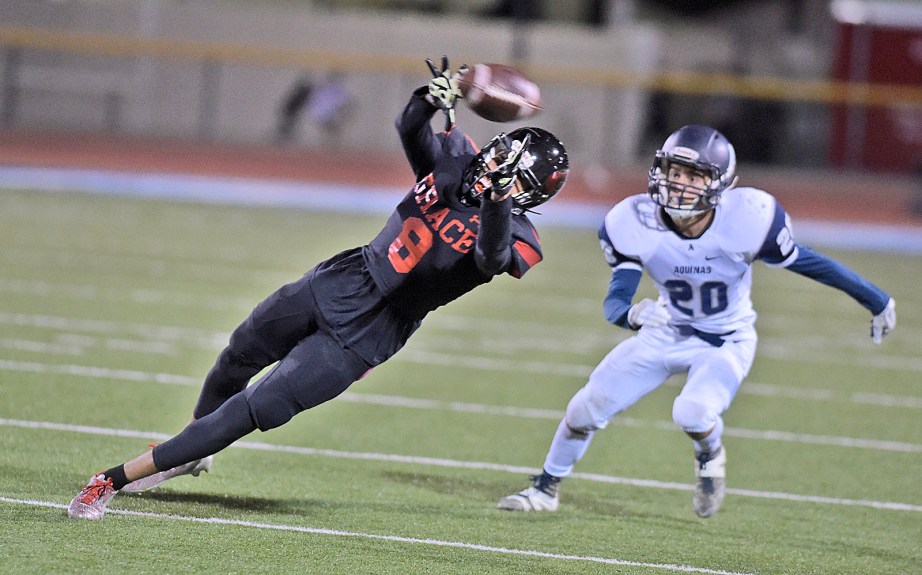 Grace Brethren receiver Jauqine Vukobradovich (8) reaches for a pass as Aquinas defender Miguel Hernandez (20) looks on during the CIF Division 2-A Regional Championship Bowl Game between Grace Brethren and Aquinas at Moorpark College in Moorpark on Saturday, December 9th, 2017. (Photo by Dan Watson for SCNG)

The Lancers were moments away from winning their first CIF title since 2004, and Porrazzo was in disbelief.

“I just looked at Blake and said ‘Did we win CIF?’ ” Porrazzo said. “It didn’t even feel real.”

The 63-24 win was indeed real, and it meant even more to Porrazzo, Cargnel, Jauqine Vukobradovich, Dassani Freeman and Jermel Jones.

For the five seniors, it was proof that fighting through adversity was worth it. All but Jones were on the 2015 team that had to forfeit playing for a CIF title after the Southern Section discovered Grace Brethren had used an ineligible player.

Jones, who transferred from Long Beach Poly before this season, nearly quit after he had to sit out the first five games due to section transfer rules.

Yet now, they have not only won a section title, they will play for the CIF Division 2-A state championship Saturday at Sacramento State.

“It’s a great feeling to play in that stadium,” Freeman said, “To play my final game there is amazing.”

It also validated the seniors’ decision to stay two years ago. With the Lancers being banned for the 2016 postseason, they had every reason to leave and try to play for two possible playoff trips instead of wait for this season.