Love Leads from Taiwan to Iowa

The Keota Eagle in Keota, Iowa, shares the story of Edwin and Eloise Jordan, who serve at the Pleasant Grove Grace Brethren Church, in nearby North English, Iowa. They recently told of their experiences at the North English History Center. A portion of the story appears below. Click here to read the complete article, which actually continues in the September 29 edition of the paper. (GraceConnect will share a link to that when it becomes available.) 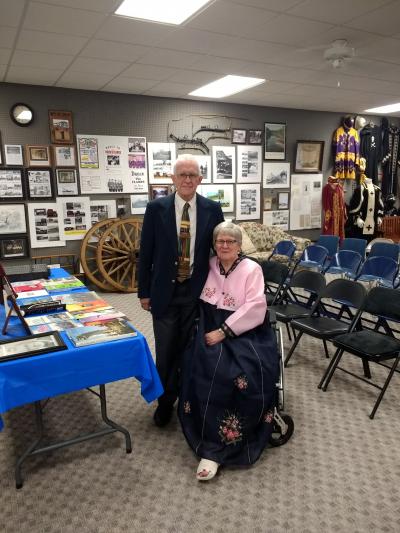 Sometimes, love makes the world go ‘round, and sometimes, love goes ‘round the world. Both of these statements could be considered true for Pastor Edwin Jordan and his wife Eloise, of Pleasant Grove Grace Brethren Church, rural Millersburg. The couple now makes their home among us, but as those attending their presentation at the North English History Center on Sunday, September 23 learned, they actually met years ago, in the far-away land of Taiwan.

During the presentation, Eloise spoke first, sharing stories of her years abroad as a teacher, principal, and counselor at a Missionary school in Taiwan from 1973-2007. She shared several slide photos of her life there, to show the contrast with rural America, specifically in population. One photo, in particular, brought the Chinese saying to life, “People Sea, People Mountain.” As Eloise said, although Taiwan is only half of the size of Iowa, there are eighty times as many people living there.

In addition to some teaching stories, Eloise shared what it was like to be in Taiwan in 1979 when relations were strained between the United States and Taiwan. Rather than being afraid during this time, Eloise was instead protected by her Taiwanese friends and associates. Even a taxi driver told her, “You are safe. It is your government, not you.”