‘Love Your Neighbor’ Comes to Life in Akron 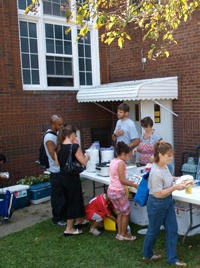 Nate and Rachel Gurnish serve pulled pork sandwiches to guests at We Care Ritzman, an outreach of the Ellet Grace Brethren Church in Akron, Ohio.

The people of the Ellet Grace Brethren Church in Akron, Ohio, love their next-door neighbors. And there are more than 300 of those neighbors to love–most of them under the age of 10.

The Ellet church is right next door to the Ritzman Community Learning Center, a K-5 elementary school in the Akron public school district. The church has formed a bond with the students and staff at Ritzman by simply seeing and meeting needs.

Pastor Jonathan Carey of the Ellet church says that the “relationship with Ritzman has opened people’s eyes–energized them.”

That relationship began about 20 years ago when the pastor’s mother, Peg Carey, with the help of the late Dortha Wiley, whose husband, Ralph, was then interim pastor, started a Good News Club at the church. The club attracted students from Ritzman and soon had several dozen in attendance. The impact has been significant.

For example, when a Ritzman student was having some problems in school, her teacher suggested to the girl’s mother that the girl should go to the Good News Club next door. She did, and she and her mother also began going to the church. The daughter accepted Christ, and her mother got back on track with the Lord as well.

The Ellet church family began to seek other ways to connect and serve their young neighbors next door. Pastor Carey says that people realized, “We can be a community church [and] use our building and resources that way.”

About seven years ago, the Ellet congregation noticed that parents of Ritzman students didn’t have a place to park when they came to pick up the children. When the church offered the use of its parking lot, officials at the school cut away a section of the fence between the two properties, and the church put in steps and hand rails. Now parents can wait in the church parking lot. As an added benefit, members of the congregation distribute water in the warm months and hot chocolate when it’s cold.

“We have been sending school supplies at the beginning of the school year for five or six years. We give the office the supplies and they distribute them as needed throughout the year. We also have been giving every child in the school a Christmas gift. It’s a bag filled with essentials like gloves, toothbrushes, toothpaste, a few fresh school supplies, a little candy, and some sort of toy.

“Over the years, we have had people come to the church as a result of any number of these activities.”

Gurnish says the church has also organized Easter and Halloween events for students, plus provided lunch and Christmas presents for the teachers.

This year a new event was added. On the afternoon of August 29, the church hosted “We Care Ritzman,” a back-to-school fair for students and their parents. The fair included such attractions as food, games, a “flush machine” (similar to a dunking machine), and an inflatable obstacle course. Three hairstylists cut 38 heads of hair, and about 75 family photos were taken. One man, a member of the Gideons, gave away 62 New Testaments.

One unique aspect of the event was a uniform exchange, since Ritzman students wear specified clothing. Families could bring outgrown polos, pants, etc. to swap for garments that fit. One mother says that her son wasn’t especially excited to go back to school this year. But when he got some “new” clothing at the swap, his outlook changed, and he looked forward to school.

Gurnish, who coordinated the event, worked with church member Vida Shaffer (her “right hand woman”) and committee chair people to organize the event. The chair people included two young people, Devan Keeling and Alec Carey, who came up with the idea of a Wii bowling tournament. Church volunteers ranged from third graders to senior citizens.

“At that service, they did a slide show on their project, ‘We Care Warsaw.'” Gurnish saw elements of WLGBC’s Christmas community service day that could be adapted to her church’s connection with Ritzman.

The students and staff at Ritzman appreciate their friendship with the church family.

“Ellet Grace Brethren Church has gone above and beyond to assist our students and staff over the years,” says Principal Larry Bender. “They have donated school supplies, given Christmas presents to our students, developed an after school tutoring club