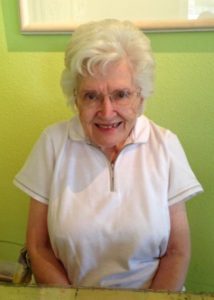 Lucille Miller, was born on February 7, 1923, in Stillman Valley, Ill., entered the presence of the Lord she loved with all her heart on October 23, 2017, in Roanoke, Va., while in the home and under the tender devoted care of her loving daughter, Kathie Kingery Maxwell.

She is preceded in death by her husband, Grace Brethren Pastor Ward Alvin Miller and her son, Timothy Paul Miller. Along with her daughter, Kathie, Lucille is survived by her son, Dr. David Ward Miller, a pastor, in Exeter, Calif.; five grandchildren, David Kingery, Andrew Kingery, Joshua Miller, JaCynda (Miller) Lloyd, and Jenysia Miller; and 12 great-grandchildren.

Lucille’s parents legally immigrated from Sweden before she was born and settled down on a small farm in Illinois. Her hard-working father could not afford a tractor and plowed the fields with horses to grow corn to feed pigs. Lucille spoke and wrote fluent Swedish.

Lucille was born an identical twin to her sister, Lorraine, the two remaining close all their lives, both marrying church ministers who both died the same year.

Lucille attended Bob Jones University majoring in music with competency in piano, organ, and clarinet. At BJU she met her husband, Ward. Later, as a mother of three and an elementary school teacher, she completed her degree in education and was in the first graduating class of California State University of Fullerton, California.

Lucille taught in Christian and public schools and held on occasion the position of principal. As a devoted pastor’s wife, she served in many roles over the 50 years of her husband’s ministry. She taught children’s Sunday school classes, played the church organ, sang in church choirs, and constantly entertained church friends.

She often opened her home to couples and families in transition without a place to live.

Lucille loved the arts. She painted beautiful artwork with oils and watercolors. Her skilled piano playing often filled the home with classics and Christian hymns. She insisted her children learn to play a musical instrument or two. Her artsy bent included beautiful hand-made crafts and sewing ornate quilts. 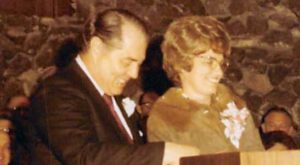 Ward and Lucille Miller were honored by Community Grace Brethren Church, Whittier, Calif., following his 17 years of ministry there.

This busy woman daily made time for her Lord and Savior, Jesus Christ. If her children got up early, they would find her in a soft chair in the living room with her Bible open and a cup of coffee nearby. Daily reading her Bible and prayer was her life-long habit.

Lucille was proud of her Swedish heritage and kept Swedish traditions, including Swedish pancakes and Lutefisk, the former loved by her family and the later endured with gratitude it smelled the house up only once a year.

Visiting Sweden with her husband was a highlight of her life.

She served as a vital partner in her husband’s Grace Brethren pastoral ministries in Osceola, Ind., Whittier, Calif. (where they raised their children in a growing large, yet close “church family”), Modesto, Calif., back to Osceola, Ind., and finally in San Bernardino, Calif.

Lucille and Ward retired in Ocala, Fla., where Ward died. After a time living with her twin sister, she lived with her daughter, Kathie, who generously provided her with her own downstairs apartment for dignified independent living. As Lucille declined in health, Kathie joyfully devoted her life to her mother’s care, for which Lucille overflowed with gratitude.

The genuine sweet joy of the Lord prevailed throughout her life to the very end, even when dementia and confusion set in.

Without any exaggeration, Lucille Miller was the noble woman, wife, and mother of Proverb 31.