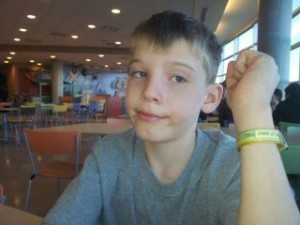 Several weeks ago, Lyndan Edwards, eight-year-old son of Canadian church planters Oliver and Cheryl Edwards, was diagnosed with a cavernoma, a blood vessel overgrowth. Surgery to remove the cavernoma is scheduled for this week. Here is an update, sent yesterday by GBCanada.

After the initial diagnosis of a tumor in Medicine Hat on February 28, Lyndan was referred to Alberta Children’s Hospital in Calgary (2 1/2 hours away).  Consultation the next day revealed not a tumor, but a bleed called a cavernoma.  It is putting pressure on nerves at the brainstem; a subsequent bleed could be catastrophic.  It was not deemed “urgent”, but needed to be removed sooner than later.  It is a blessing that it is operable, but will of course entail all the inherent risks of brain surgery and the realities of at least a few weeks of physical therapy afterward since brain tissues don’t like to be disturbed.  There are also no guarantees that his symptoms will be fully resolved by the surgery; that depends on how much damage the bleed did to the nerves.

Surgery will be in Calgary first thing on Wednesday morning, March 14; Lyndan will have a four-day hospital stay at a minimum.  Since his 9th birthday is on March 17, he will be in the hospital for his birthday.  The Hospital has a service here through which you can send an electronic message that will be printed and sent to his room.

Oliver and Cheryl are so grateful for the outpouring of prayer and encouragement; please continue to pray!  They feel very good about the staff they have met at the hospital and the neurosurgeon who will be doing the operation.  But this is a scary thing for all of them, and whatever the outcome, there is still a long road ahead.

Please take some time to pray for Oliver & Cheryl and Grasslands Community Church at this time. Pray for Lyndan and for the doctors. Thanks for praying for them.