Mabton Missionary to Malawi is Featured 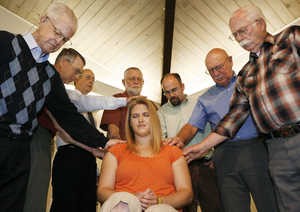 Feth has returned four times, each time staying longer and getting more involved. She grew attached to a boy named Wongani and is in the process of adopting him.

When in Malawi, she lives with a friend named Anna Kamanga, a nurse with four of her own children. Wongoni is staying with Kamanga now.

Together, they are building a shelter for children between the ages of 2 and 5, hoping to care for them at least until they begin school. They call it Wongani’s Hope.

So far, they have built a house, still without water and electricity, and a small farm with beans, cassava and chickens to make the charity self-sustaining. She also receives financial contributions through her church, Mabton Grace Brethren, and other donors.

Her pastor, Paul Guay, called Feth “abandoned to God’s will and glory.” Church officials sent her off with a special prayer last Sunday.

Her favorite coffee shop, Indulgences in West Richland, held a barbecue fundraiser in their parking lot, raising more than $4,000 — quite a bit considering Feth and Kamanga purchased their 5.5 acres for only $1,500.

They still need money for electrical and water hookups and a building for the children and the yet undetermined cost of applying for a permit from a sometimes dysfunctional government. When they get the permit, she will have an easier time extending her visa to stay in the country longer than the current limit of nine months.