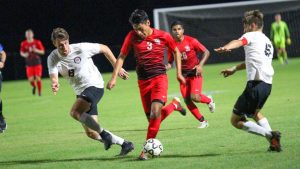 The Lancers lost 5-0 to Mid-America Christian on Saturday night at Austin-Tindall Sports Complex. Grace was making its third trip to the NCCAA title game and first since 1976.

The first 10 minutes were calm. Each side battled for possession and tried to test the other’s defensive line.

The first legitimate chance for either side resulted in a goal. MACU found itself open near the top of the penalty box and converted the shot for a 1-0 lead in the 13th minute.

The early goal seemed to stun the Lancers. Grace surrendered two more goals over the next 11 minutes to put itself in a difficult 3-0 hole.

Grace had opportunities to score. Ulisses Miranda got free after a long pass. His shot on goal took a deflection, nearly resulting in an own goal before rolling wide for a corner kick.

Miranda also had a headed shot in the penalty box go wide after a strong cross by Cole Voss.

MACU added a fourth goal shortly after halftime, scoring on their second attempt of the half.

Cody Boerema earned a shot on goal in the 55th minute, but it would be another 17 minutes before the Lancers (11-8-3) registered another attempt.

The game was essentially ended in the 76th minute after the Evangels pulled ahead 5-0, but Grace continued to fight until the final whistle.

The Lancers had four shots alone over the final five minutes, but Grace was unable to find the back of the net.

Omar Gonzalez and Cedric Brenneman had late shots, and Boerema had the final shot of the match.

At the conclusion of the tournament, Kyle Smith and Henrique Cerruti were named to the All-Tournament Team. – from gclancers.com