Johnston and Terri Moore didn’t set out to be advocates for adoption, but by the time they had adopted their third child, the couple was on mission to help others with the process. 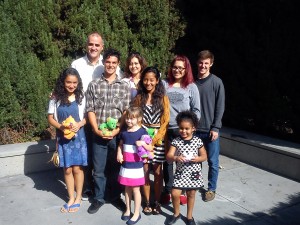 Johnston, who worked in the film industry for nearly two decades, recalled the frustration of working through the system as their first two sons joined their family through foster care.1 While it seemed to be a “match made in heaven,” they battled custody issues, including difficulties surrounding the Indian Child Welfare Act of 1978. He and Terri, a teacher, decided the next adoption would be accomplished following a different path.

“Then God impressed upon us that He didn’t bring us through that just to walk away from it,” he remembered. “He said, ‘I brought you through that so you can help others and so you can be a voice for these kids, because these kid are voiceless.’”

It came at a time when they were feeling led to adopt someone considered unadoptable, “that the system had given up on,” he said. The almost 13-year-old from a difficult background had been in multiple foster and group homes, but it wasn’t long before she was welcomed into their family. (She’s now 23 and working toward her degree in culinary arts.)

“Then at some point we just dropped the whole idea of having biological kids,” he added. “We just said, ‘Let’s just keep doing this.’” It was a definite choice, “but we believe it was a God-led choice.”

Today, the couple, who are members of the Grace Brethren Church in Long Beach, Calif. (Lou Huesmann, pastor), has seven children – all of them adopted through the foster-care system. And their family has become a voice for foster-to-adopt, not only in southern California, but also throughout the U.S.

“We believe that God designed children to be raised in families; not in institutions, not in foster care, but in families,” he stressed.

Johnston began connecting with others who were involved in foster care and orphan care ministries after a back injury briefly sidelined him. Unable to work in television and film production, he realized it also was an opportunity to spend more time with their kids. The nearly year-long disability quickly morphed into a new career.

“I could have chosen to go back,” he stressed, “but I really felt like God was leading me elsewhere.” He recognized a new passion was developing – one that had advocates for adoption as his heroes, not the people in Hollywood.

He was approached with the opportunity to become a writer for Hope for Orphans, an organization that partners with churches locally and internationally to train pastors and lay leaders to carry out James 1:27 —“to care for orphans and widows in their distress.” Joining the staff in 2007, he also began to help lead workshops around the country and coordinated the National Foster Care Prayer Vigil for several years. Because of the circumstances surrounding the adoption of their sons, he found himself testifying in Congress regarding the Indian Child Welfare Act and consulting with couples who wanted to adopt children of American Indian descent.

When Hope for Orphans moved their offices to Texas, he was asked to join them there. But he and Terri decided to stay in southern California, where they were licensed foster care providers and were thoroughly involved in their local church. At Long Beach Grace, they’d seen a “ground swell” of support.

With Eric Churchill, he founded Home Forever, an organization that promotes the adoption and well-being of foster children. With a background in international adoption, Churchill and his wife, Aimee, are, likewise, foster parents. He also provided the nonprofit board and leadership experience.

Focusing on the permanency found in a family, the organization seeks to address policies that seem to prevent children from reaching that stability. They also speak at churches and other gatherings about God’s heart for orphans and adoption, and His desire for children to be raised in families.

“We also believe that it’s not just about adoption,” he stressed. “There are other things that people can do,” he adds, noting someone can mentor a family, provide meals, or serve in other ways. “We try to help people find whatever their passion or calling is.”

At Long Beach Grace, Home Forever staff (led by Stacy Dybas) have formed the Love Gives Foster Closet. It offers practical support for foster parents and caregivers by providing essential clothes and items needed by children in their care. Sponsored by the church and Home Forever, the Closet may be used by anyone in the Long Beach community who is involved in foster care. In addition to foster and adoptive families, the Closet has helped those who are in risk of losing their kids because they don’t have money for such items or grandparents who unexpectedly must provide long-term care for their grandchildren. (For more information, see lovegivesfostercloset.org.)

Moore said statistics show that the foster care system is not working. He noted that one study cited 70 percent of the inmates in California’s San Quentin State Prison came out of foster care; another stated 45 percent of the homeless in the state were once foster children; and several years ago, 59 percent of the girls arrested for underage prostitution in Los Angeles County had come out of the foster system.

He’d like to see the church step in to help these young people. It’s a message he shares whenever he can, talking about what God’s Word says about the fatherless.

“A lot of people don’t think about orphans as kids in foster care,” he noted.

He’s emphatic that the children in foster care need protection, “but they also need families,” he said. “The government can’t be a family,” he adds, suggesting that the church has to provide the family.

He knows there are no guarantees with foster-adoption. When a child moves into the home, he or she may go back to his or her biological family at some point.

“That’s not a reason to run away from this,” he stressed, noting that couples are often protecting themselves. “Christians will say, ‘Well, we would do that, but it would be too painful to fall in love with a kid and then lose the kid.’”

He’d rather a family focus on the child’s heart and on what God wants. But he also knows the children come with baggage – emotional or physical scars from years of abuse, wounds that develop as they are separated from loved ones or shuttled between homes, and the stigma of being part of the foster care system.

“Ultimately, it’s not our job to fix these kids,” he stressed. “It’s God’s job. It’s our job to point them to God. I can love them unconditionally, and get them the services they need, and be a voice for them, but I can’t fix them,” he added, noting that sometimes the system that has been designed to protect them, often hurts them more than their biological parents did in the first place.

“It’s gonna take more than a little love,” he said. “We have to be educated, we have to be equipped. We can’t go into this with rose-colored glasses.”

“Yes, there can be more issues with some of these kids, but you also have to go into this recognizing God did not say, ‘pure and undefiled religion is caring for widows and orphans in their distress … unless they’ve got behavioral issues.’”

He’s written about concerns related to foster care in a booklet published by Focus on the Family. Love and Loss in Foster Care is available through christianbook.com (http://bit.ly/1CUNdnl).

The Moores have found the foster-to-adopt experience has not only impacted the lives of their children, but also of the biological families involved. He likens it to the parable of the Good Samaritan. “It’s someone we wouldn’t normally associate with or it’s the drug-addicted mom,” he said. “But that’s your neighbor, and that’s who God is calling you to love.”

They’ve had opportunities to lead one biological family member to faith in Christ and helped others turn their lives around. They also know that doesn’t mean custody should necessarily always be returned.

“We’ve had biological family involved in the kids’ lives even after the adoption,” he said, “and for the most part that’s been good.”

He recalled how the family was featured on the program,

Home for the Holidays, a special that was broadcast nationally on CBS in December 2012. On the program, their oldest daughter, Ashley, shared how she’d been neglected, abused, and needed a home before she was taken in by the Moores.

“Terri got a text from [Ashley’s] biological mother in the middle of the show, thanking her for what we’ve done for Ashley,” he said. “That’s a God thing.”

1 Foster care (in the United States) is the system in which a minor child is placed in the private home of a state-certified caregiver, often called a foster parent. This placement is usually arranged through a governmental or social service agency and includes some compensation for expenses.