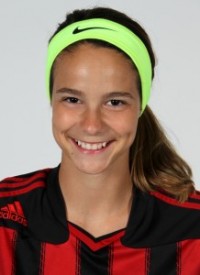 Rondeau was one of 11 female soccer student-athletes to earn a place on the College Division At-Large Team. The junior forward currently boasts a 3.94 GPA while studying biology.

She leads Grace’s team with 14 goals, 10 assists and 7 game-winning goals. Additionally she has either a goal or assist in 10 of her past 11 matches. As a result, she has racked up a number of athletic awards this year, including the 2014 Crossroads League Co-Offensive Player of the Year, First Team All-CL and Daktronics-NAIA Scholar-Athlete.

CoSIDA awards student-athletes who have maintained a GPA of at least 3.3. Members of CoSIDA then vote on eligible student-athletes through the district and national levels based on a combination of academic and athletic accomplishments.

The Lady Lancers are in the closing weeks of arguably their greatest season in program history. Grace earned its first NAIA national ranking and advanced to the championship of the CL Tournament. The Lady Lancers are the No. 1 seed in next week’s 2014 NCCAA National Championships in Kissimmee, Fla. Grace’s two pool play games are on Monday 2 p.m. against Shorter and Wednesday 2 p.m. against Mid-America Christian.