Manahan Honored with Sagamore of the Wabash Award 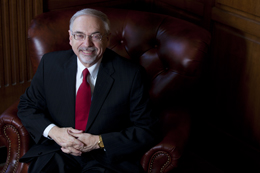 Dr. Ron Manahan, who served as president of Grace College and Seminary from 1994-2013, was honored this morning, February 17, with the Sagamore of the Wabash Award, one of the highest honors which the governor of Indiana bestows.

Dozens of local guests and dignitaries joined the college and seminary faculty for the presentation in the historic Westminster Hall, which Manahan helped save from extinction in the early 1990s. The Sagamore Award is given to those who have rendered a distinguished service to the state or to the governor. A punch and cake reception followed, since today was also Dr. Manahan’s birthday.