On Monday, the Manahan Orthopaedic Capital Center at Grace College was the site of the annual Warsaw-Winona Lake event to commemorate the life of Dr. Martin Luther King Jr. Carl Erskine, former Brooklyn Dodger baseball player, was the speaker. A portion of the story on the online news site, InkFreeNews, which reported on the event, appears below. Click here for the complete article. 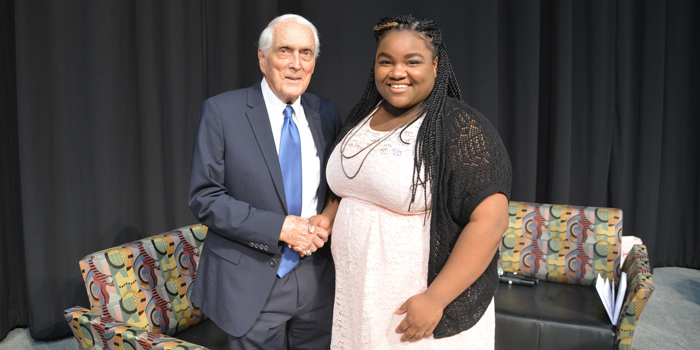 WINONA LAKE — Even long after they have passed on, an individual’s words and character can still speak to people. That was the message of former Brooklyn Dodger baseball player Carl Erskine during the Dr. Martin Luther King Jr. commemoration event on Monday, Jan. 16, at the Manahan Orthopedic Capital Center.

During his time on the Brooklyn Dodgers in the late 1940s to the 1950s, Erskine pitched two no-hitters, and was on the team that won the 1955 World Series. Erskine had a hand in the integration in baseball when he was a teammate with Robinson.

Erskine spoke of the legacies that his former teammate Jackie Robinson and Dr. MLK Jr. built during their lives. He mentioned how the two propionates of racial equality made a difference just by living lives with integrity and character.

During the event, Erskine mentioned that individuals need to hear the “echoes” of the great man that DR. MLK Jr. was. “Mr. King, we hear your echo,” said Erskine.

Erskine talked at length about the need to be faithful in doing the right thing, even if it seems like the action is small. He attributed the continuation of the movements in racial equality to many people doing small things that have led to big changes. Erskine noted during Robinson’s entire baseball career, Robinson never lashed out at anyone, even when he may have been treated unfairly due to the color of his skin.