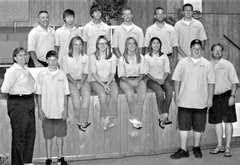 Having limited tools, most work was done by hand.

The group painted an estimated 20,000 bricks, laid about 6,000 stones for sidewalks, dug a 6-foot-deep hole that will be used for a drainage system, laid a brick patio, painted the interior of the girls’ home, and did tile work for the entryways at the boys’ home.
In addition, the team ate lunch with the children, put on dramas and skits, and built lasting friendships.
On the day the group was leaving, one child said, “Thank you for making our home better.”
The mission team went on a weekend retreat in the mountains of Samaipata, where they visited ancient ruins, “and heard the amazing stories from the missionary families they were working with of how God called them into foreign mission service,” Youth Pastor Ron Shank said.
Social Share