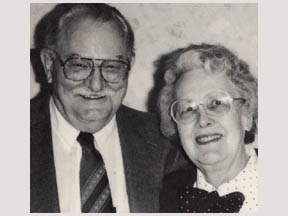 The following appears on the Grace Brethren International Missions website this morning:

Born in Chicago on October 29, 1915, to pioneer missionaries in then-French Equatorial Africa, Rev. James and Dr. Florence Gribble, Marguerite spent much of her childhood with loving foster parents in Washington State, John and Hattie Weed.

She devoted her life to the Lord, her husband, their daughters and families. Harold and Marguerite spent over 27 years in the Central African Republic where they are remembered to this day for their ministry and brotherhood with the people. There Marguerite taught literacy and Bible.

In the 1960s, in California, she taught at Brethren High School and French at Biola until becoming legally blind from macular degeneration.

In 1970 Harold and Marguerite settled in Lakewood, California, where she faithfully continued to serve the Lord by supporting her husband as associate pastor at Grace Brethren Church of Long Beach and by handing out tracts and witnessing to the thousands of people with whom she came into contact.

In 1994 she authored a book, Live in God’s Kindness, in which she detailed her testimony of God’s faithfulness and grace to her.

Marguerite is survived by three loving daughters, four grandchildren, and four great-grandchildren. A memorial service will be held on Sunday, January 15 at 2 p.m. at the Grace Brethren Church of Long Beach, in the chapel. Pastor Jerry Giles will be officiating.

A private burial service is planned for January 13th.

In lieu of flowers, please direct donations in her memory to Grace Brethren International Missions for literature for the Central African Republic.