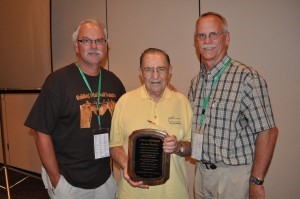 Martin Garber (center) receives the Lifetime Achievement Award from the Association of Grace Brethren Ministers in 2010. He is pictured with Mike Taylor, former missionary to the Central African Republic, and Joel Richards, then president of AGBM and pastor of the LaLoma Grace Brethren Church, Modesto, Calif.

Rev. Martin M. Garber of Grace Village Retirement Community of Winona Lake, Ind., died at 5:26 p.m. on Wednesday, August 1, 2018, at Kosciusko Community Hospital of Warsaw at the age of 93.

Martin proudly served as a medic in the U.S. Army during WWII and was honorably discharged in 1946. He graduated from Westmont College in California and Grace Seminary in Winona Lake, Ind. Reverend Garber has been a resident of Kosciusko County, Ind., for the past 28 years and spent his life as Pastor.  He served the Lord as a missionary in the Central African Republic for over 40 years, and at the LaLoma Grace Brethren Church in Modesto, Calif. He was a past member of Winona Lake Grace Brethren Church and New Horizon Community Church in Winona Lake, where he served as an elder. Most recently he had been attending Oak Grove Community Church in Warsaw. Martin stood by his faith and was called home to be with his Lord and Savior… he will be dearly missed by his family.

Visitation will be held on Wednesday, August 8, 2018, from 10:00 a.m. – 1:00 p.m. at Redpath-Fruth Funeral Home, 225 Argonne Road, Warsaw, Ind. His funeral service will follow immediately at 1:00 p.m. at Redpath-Fruth Funeral Home and officiated by Pastor Doug Lemon. Burial will follow with a graveside service at Oakwood Cemetery of Warsaw with military rites conducted by active duty members of the Army Honor Guard, American Legion Post #49 and V.F.W. #1126 both of Warsaw.

Memorial donations in Rev. Garber’s name may be directed to Water for Good, P.O. Box 247, Winona Lake, Indiana  46590 and would be appreciated by the family.