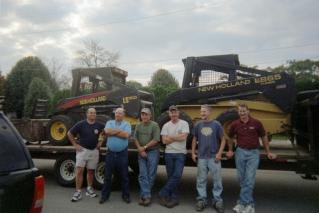 Six men from the Martinsburg, Pennsylvania, Grace Brethren Church (Jim Laird, pastor) left the church parking lot on October 29 bound for Gulfport, Mississippi. Their caravan consisted of an RV donated by a church member, two skid loaders and chainsaws and other tools.

One of the skid loaders was loaned to the team by a church member and the other by a business in the community. The Martinsburg Grace Brethren Church family rallied around these men with donations of supplies, equipment and money for the trip.

The 24-7 Youth group also participated by preparing 45 backpacks for students affected by Hurricane Katrina. Each backpack contained a Bible, a tract and school and personal supplies. The Martinsburg youth also wrote letters to the students who would receive their backpacks, encouraging them and sharing Christ’s love.

The Martinsburg GBC Katrina Team was headquartered at the Crosspoint Church in Gulfport. (www.mycrosspoint.org) They were among 130 relief workers stationed at the church that week. A church group from Alabama was there preparing meals for the workers; a hot breakfast in the morning and a cooked dinner for supper, along with bag lunches to be sent out with the work crews during the day.

The Martinsburg team worked primarily on tree removal, since they had the skid loaders and chainsaws. Each day they would choose 3-5 work orders of residents who had contacted the church about having a team come and do work for them.

Then as they worked at the home of the person with the work order, they would also scout out the neighbors and offer to do any work they needed done as well. Each home owner was given a Bible and a business card for the Crosspoint Church.

The men were an encouragement to a very discouraged population. The devastation is huge and they were there nine weeks after Katrina hit. Life is getting back to normal on some fronts: there are stores and restaurants open, the children are back to school; but in other ways things will not be normal for a long, long time.

Many residents of Gulfport are not living in their homes. They are staying with friends or family in the area and trying to work and take care of life while dealing with the damage done to their homes. Many people are depressed and there have been suicides.

The cost of removal of debris and basic repairs is outrageous. These will not be covered by insurance or FEMA. So the work the volunteer teams do for the homeowners represents an enormous financial help, but more importantly it speaks of Christ’s love for them and the love Christ’s followers have for them.

The team was inspired by the other teams at Crosspoint that week. The Martinsburg GBC Katrina Team would like to see a group go to Gulfport once a month. They would also like to get local donations and send a tractor-trailer load of drywall down for one of the teams to hang.

There are already plans for a team to go the week of January 21, 2006. Other dates being discussed are the week between Christmas and New Year’s (to facilitate any students who would like to go) and the first week of January. Any individuals from other churches who would like to participate in any upcoming trip can contact Rusty Russell at rkrsemex@aol.com <mailto:rkrsemex@aol.com>.