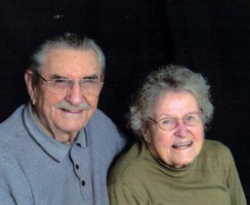 After a risky Pacific Ocean crossing during WWII, Marvin and his wife Dorothy took a river boat up the Congo and Ubangui rivers to the Central African Republic (CAR) where they would serve for 40 years as missionaries.

Upon retirement in 1986, Marvin and Dorothy established residence in Winona Lake, Ind., where he was active at Winona Lake Grace Brethren Church where they were members, and he served as a former pastor there. He then moved to Arizona in 2009.