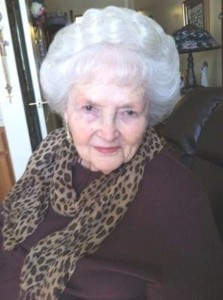 Born Nov. 20, 1920, in Hagerstown, she was the daughter of Jacob Merle Hopkins and Florence Isabel Keyser Hopkins, who preceded her in death.

In 1940, she married Andrew Auxt and served the Lord with him for 70 years.

Following graduation from Hagerstown High School in 1938, she attended Washington County Hospital School of Nursing and was later certified by the American Association of Medical Assistants specializing in administration.

She was employed for 25 years as the administrator of Plastic Surgery Services, Dr. John Clark and Dr. Michael D. Hall, retiring in 1988. She was then employed by Johns Hopkins in its research program.

As a member of the Plastic Surgery Administrative Associates, she served as treasurer of the national organization, as a past president of the Potomac Garden Club, and chairperson of alumni affairs of Hagerstown High School class of 1938.

She graduated from Washington Bible College with a teaching diploma, and for 15 years she volunteered in the reading program of Grace Academy.

A charter member of Maranatha Brethren Church (Dan Thornton, executive pastor), she was a member of Women of Grace for Missions, and for many years was active in children’s ministry as a teacher, junior department supervisor, vacation Bible school director, children’s music ministry, and as Sunday school secretary. She served as the wedding coordinator for many area brides.

She was preceded in death by her husband, Andrew; her brother, William F. “Bill” Hopkins; and granddaughters, Adair Kriegbaum and Jamie White.