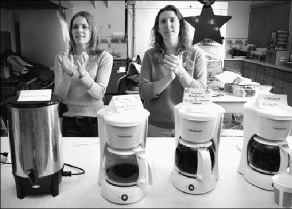 Stacey Mayne (left) and Davada Irons (right) of Thurmont, MD, clap along with the Hagerstown Grace Brethren Praise Band at In God’s Hand Coffeehouse in Thurmont. A story in today’s local paper marks the one-year anniversary of the coffee house. (Gazette photo)

Here are several selected paragraphs from the story. To read the entire article click here:

Thurmont’s Christian coffeehouse, known as In God’s Hand, is not your typical coffeehouse.

The room downstairs in Weller United Methodist Church is dimly lit and candles flicker in the center of each table. You hear plenty of friendly chatter and see trips back and forth to the coffeepots.

Attendees include small children, teens, moms and dads, friends and grandparents, sipping coffee and sodas, eating cake and munching on snacks donated by area businesses. And as the music plays through the night, they clap their hands and sometimes reach their arms to the sky.

They are there, co-organizer Barrett Irons said, not just to drink coffee, but for fellowship and to worship God. . .

. . . Bands play every hour on the hour from 7 to 9 p.m. The first band is generally mellow and for the older crowd. The second band is the transitional band, playing contemporary worship songs. The third band is usually Christian rock for the young crowd. Last Friday, the lineup included Sherman Mason and John Olney, the Hagerstown Grace Brethren Praise Team and Jakob’s Night.

None of the bands perform with the expectation of being paid, though they split evenly any cash donations received each night. They work for God, Irons said, and to share the message of Jesus Christ.