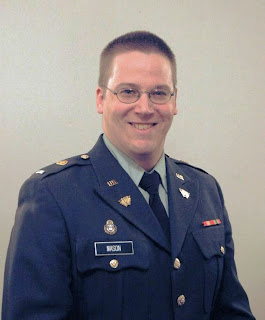 Chaplain (First Lieutenant) Jeff Mason, a member of the Grace Brethren Church of Columbus, Ohio and a recent graduate of Grace Theological Seminary (pictured at right), has received a commission in the U.S. Army Reserves and is scheduled to be deployed on July 19 with the 157th Combat Service and Support Brigade (based in Willow Grove, Pa.).

It all happened pretty quickly, in answer to Jeff’s prayers that he would be able to serve alongside deployed troops.

“The initial contact was made on Monday,” Jeff writes. “I received a call on Tuesday officially offering me the position. On Wednesday I watched as I received copies of emails being sent to majors, lieutenant colonels, and colonels instructing people as to what paperwork needed to be done. On Thursday I signed the paper that will initiate the creation of my orders so that I will be attached to the unit. After the deployment I will have the option of staying with that unit, transferring to a Reserve unit closer to home, or going on full active duty. That decision will be made at a later time. It won’t be long now that I get to serve alongside soldiers and share with them the love of Jesus! Thank you for your prayers!”