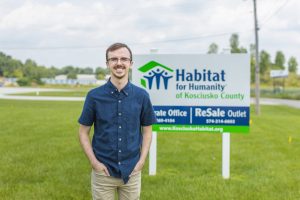 Laying a strong foundation is important. It doesn’t take an expert in construction to tell you that. Whatever it is that’s being built, be it a home, an organization, or a career, the foundation is key to success.

Ben Logan, of Jonesboro, Indiana, would have to agree.

Little did he know, when he enrolled to study environmental science at Grace College, his applied learning experiences and community connections would actually help him build a strong foundation for a career in nonprofit management. And Logan never imagined that before he walked across the stage for graduation, he would become an executive director at Habitat Humanity where “building strong foundations” would be part of his everyday vocabulary.

Logan chose Grace for its strong environmental science program led by Dr. Nate Bosch. The program partners with the Lilly Center for Lakes and Streams, a division of Grace College committed to research, education, and collaboration to make the lakes in Kosciusko County clean, healthy, safe, and beautiful.

“I was very much excited to study under Dr. Nate Bosch at the Lilly Center,” says Logan. “I loved the hands-on factor, and I loved that there was a place to work as a student.”

Logan dove head-first into his work with the Lilly Center, but it didn’t take him long to realize that his passion was more about the people in the organization and less about the research.

“I liked the idea of fundraising and being a spokesperson for a nonprofit. I enjoyed going to the fundraising events and seeing what went on behind the scenes. I just fell in love with nonprofit work,” Logan recalled.

Logan’s journey to finding his career in nonprofit work was anything but typical, but according to him, “I would not do it any differently.”

“I loved the hands-on projects,” said Logan. “They got me connected to many, many people.”

Logan’s applied projects connected him with the Advancement Department at Grace College, the Kosciusko County Community Foundation, Ivy Tech, and many organizational leaders with nonprofits in the community.

“I would create my own internships,” explained Logan. “I would go up to an organization’s leader and say, ‘Hey, I have a project, and you have work to do. Can I do this for you and call it an internship?’ And they would say, ‘Absolutely, let’s do it,’” he said.

Over the course of the master’s program, Logan developed an impressive resume, littered with mini internships around Kosciusko County. Two of those internships were for Habitat for Humanity.

Logan got connected with Habitat his junior year at Grace for an entrepreneurial practicum. It was Logan’s job to help coordinate more than 300 volunteer hours for those in the class. This required regular communication with Mickey, the organization’s executive director, as well as the store manager, Matt. After asking Logan to volunteer a few more times after his practicum was over, Matt nudged Logan to apply for an open part-time position at the store. Logan accepted the job in October of 2020.

The next semester, Logan began doing the applied projects for his master’s degree in nonprofit management with Habitat. As he got to know the personnel and the needs there, he began helping with fundraising, advancement, database development, and grant writing.

Meanwhile, Habitat started a new hiring cycle to replace the interim executive director. A board member tapped Logan’s shoulder pretty early on in the cycle, and he decided to put his name in the hat.

“They liked the experience that I did bring,” said Logan. “I didn’t have years of executive director experience, but I had a lot of great references from all of these organizations I had worked for over the course of my master’s program,” he said.

After two interviews, Logan was offered the executive director title on May 10, just five days before graduating with both his undergraduate and graduate degrees. To this day, Logan is still in disbelief of how it all panned out, “I liked the idea of being an executive director, but I never thought it would happen before I graduated from college,” he said.

At the end of May, Logan started his new position and dove head-first into building an organization and building homes. His duties at Habitat include working alongside a board of ten directors and overseeing three key staff and countless volunteers who play crucial roles in the organization. As Habitat’s key spokesperson, Logan has enjoyed getting to know more about the organization and using what he’s learned to connect people with the mission.

“I love how tangible the mission is,” says Logan. “Everyone comes together, puts hard hats on, and raises the walls. Shelter is something that everyone can connect to and get behind. It’s not a divisive issue.”

Logan says there is so much more to the organization than what meets the eye. One of his chief goals moving forward as the director is to help clear up the misconceptions people have about Habitat and help them better understand what the organization is all about.

“This Habitat affiliate is becoming something new, and I would encourage them to come and check it out,” said Logan.

Logan’s strong educational foundation helped him build a resume and a career. Now, he is on his way to building a strong organization. – from grace.edu