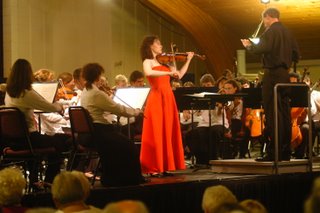 The MasterWorks Festival has made audition requirements more and more difficult and students still clamor to be accepted into the program.

“We had to turn hundreds of students away,” he said about this year’s audition process. “What we have is more college students, more 20-year-olds than ever before. The higher we raise the bar, the more students apply.”

Perhaps it’s the opportunity to receive intense fine arts instruction by a top-notch faculty in a Christian-based atmosphere.

There’s also the resort-like atmosphere of Winona Lake, the Grace College campus and a community that packs Rodeheaver Auditorium literally to the rafters during performances.

This year there are 235 students, 20 from Indiana, from the U.S., Canada, Australia, South Korea, Brazil, Germany, Austria, Norway, Honduras, Lithuania, Ukraine, Malaysia and the Philippines. Nearly half of the students are returning to the MasterWorks Festival program.

This is the ninth year for the festival, which started in New York and relocated to Winona Lake in 2001, moving here permanently in 2003.

The MasterWorks Festival is an outgrowth of the Christian Performing Artists’ Fellowship, which Kavanaugh and his wife, Barbara, a professional cellist, started with two other couples. MasterWorks began in 1997 as a course designed to prepare young people for music careers and to help shape their spirituality by including daily Christian devotions and Bible studies.

The orchestra, with its sea of violins, will have 127 players.

Kavanaugh admits the orchestra is huge. “All I can say is come early to get a seat in ol’ Rody. We may have to take out seating as we expand the stage.”

The usually articulate director mumbled something about having to build a concert hall because classrooms and practice rooms are spread throughout the Grace College campus and into the Winona Lake United Methodist Church and the Winona Lake Presbyterian Church.

The faculty is staying for an additional week after the students leave. They will perform chamber music concerts July 24-30.

All performances in Rodeheaver Auditorium unless otherwise indicated.

Wednesday, dance masterclass with Stan Rogers. time and location to be announced.