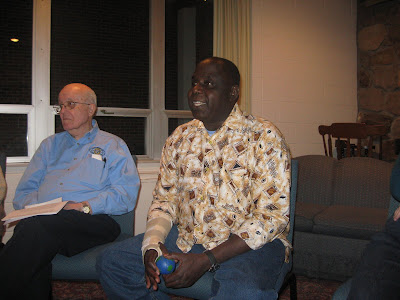 Mboi Andre, president of the union of about 2,500 Grace Brethren churches in the Central African Republic, was the featured guest at the Thursday night Global Prayer Gathering at the Winona Lake (IN) Grace Brethren Church.

Andre has regained much of the finger and hand movement since the surgery and will be seen again by surgeons on April 28, just before he returns to Africa. To the left of Andre in the photo is Dr. Homer A. Kent, Jr., president emeritus of Grace College and Theological Seminary, who had Andre as a theology student as Kent taught both in America and in Africa.