McKee Courts Lives Only in Memories and Photos 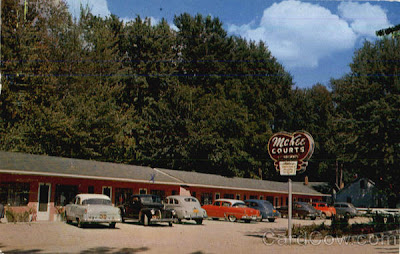 Grace College alumnus Robert Spahr (class of 1964) has sent along a couple of historic photos of Winona Lake, Indiana, as the town looked about 50 years ago. McKee Courts, shown here, was a motel located in the center of the island, which served as a men’s dorm. Those who lived there will remember the huge ruts and potholes in the driveway, as well as the moisture and mold problems in the motel itself, especially during the winter.

McKee Courts was razed a number of years ago, and the area is now just a grassy field. In the early 60s, Grace College men lived at McKee, women lived at the Westminster, and all students ate their meals in the dining room of the Westminster Hotel. Alpha Hall, which became the women’s dorm and dining area, was built and occupied in 1964.