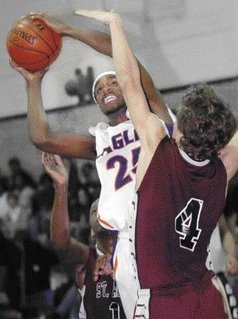 Anything less than the Potomac Valley Athletic Conference championship will be a disappointment for the Grace Brethren High School boys’ basketball.

Prior to the start of the season, Eagles’ coach Dennis Loufik said he expected the team could capture the championship. After winning the PVAC title last season, the Eagles returned four out of five starters. The addition of junior frontcourt player Brad Harris gave the Eagles a viable post threat.

Twenty-four games into the season, Grace Brethren is on pace to capture the top seed in the PVAC playoffs.

Tuesday’s, 79-72, victory at Edmund Burke (D.C.) proved that the Eagles can score with any team in their conference. Grace Brethren improved to 21-3 overall, including a 13-1 mark in the PVAC.

Considering the Eagles avenged their only conference loss to St. Anselm’s with a big victory last Friday, the only thing that may prevent them from capturing consecutive championships could be themselves.

‘‘This is definitely the most talented team that I’ve had,” said Loufik, in his third year with the team. ‘‘For the most part, everyone has played their respective role on the team and accepted it and embraced it.”

The Eagles have enjoyed a luxury that many prep teams in the county do not have. The core of the team –- seniors Devin Paige, Giovanni Flowers, Ben Fuller and Trey Clark — has played together since the eighth grade.

‘‘I think the keys to our season are just playing as a team,” Flowers said. ‘‘We know each other and we have good chemistry on the court.”

But the foundation of the team was not so rigid as to not accept a newcomer, and Harris, in his first season with the team, has managed to blend in with his teammates.

Harris admits that the Eagles carry a unique trait to their personality.

‘‘They welcomed me in and it’s a much better atmosphere her than the one I was previously at,” Harris said. ‘‘It’s really fun with them. In practice they have fun, but not necessarily by playing around. Working hard in practice is actually fun for this team and I think that’s what has helped us get better.”

The Eagles have also made strides this season in terms of winning against unfamiliar opponents. Grace Brethren captured the Arlington Baptist Tournament, the Colonial Beach (Va.) Tournament (a team first) and the Shenandoah Baptist Tournament earlier this season. By the time the PVAC tournament arrives, the Eagles should be battle-tested.

‘‘I think playing teams like Riverdale Baptist gave us all a lot more experience [in big games],” Paige said. ‘‘Overall, we played really well against some good teams.”

Playing against a traditionally powerful team in Riverdale Baptist afforded the Eagles an excellent opportunity they do not get every season. Aside from the loss to the Crusaders and St. Anselm’s, the only other team the Eagles lost to featured a frontcourt of players that measured 6-foot-8, 6-10 and 7-5.

Grace Brethren hopes to be completely healthy by the time the playoffs arrive in just a few weeks. Fuller has been out since suffering a leg injury earlier this season but Loufik said he may be back by the postseason.

‘‘These guys are looking to repeat,” Loufik said. ‘‘I think we’re a very talented team and the players have to just keep playing their roles.”