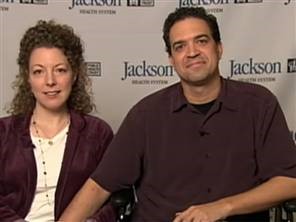 The latest e-newsletter from Los Altos, Calif., Grace Brethren Church (Phil Helfer and Mike Jentes, pastors) carries this good summary of media coverage of the amazing rescue in Haiti of Dan Woolley (pictured with his wife), whose mother teaches at the Los Altos school.

AMAZING STORY OF DAN WOOLLEY’S RESCUE
Thanks for the many prayers for Dan Woolley–the son of our sixth grade teacher Pat Woolley.  He serves the Lord with Compassion International and was in Port Au Prince Haiti when the earthquake hit.  Dan has undergone two surgeries for his injuries and recovered enough to be flown to the USA.  Then he fly on to his home in Colorado Springs.  The media attention has been rabid and he has had opportunity to share about the Lord in many ways.  Before that though, even while he was trapped in the elevator shaft of the collapsed Hotel Montana, Dan shared his faith with a Haitian bellhop who was also in the rubble of the hotel–this man received the Lord!

MSN article Buried in Haiti rubble, U.S. dad wrote goodbyes; But with iPhone info, he treated his injuries and was rescued after 65 hours

Colorado Connection by Fox News article and audio from Dan

Pat Woolley interviewed by CBS 2 from LA.
You can click here or the picture to go to the CBS 2 site and watch this powerful clip.

The 20/20 clip that Pastor Phil spoke about on Sunday.
Growing Unrest: Who’s Rescued First? Part of the 20/20 special “Earthquake Haiti: Race to Save a Country.”
also a Good Morning America article by the same journalist.

Pictures from the LA TIMES

Dan’s co-worker with Compassion David Hames is still missing. You can read more here: Compassion Workers in Haiti. Also there is a a statement from David’s family
We all are impacted by this tragedy, and are encouraged to pray and to move in action as the Lord leads to love and serve towards those God loves in Haiti.

Caribbean Vision Ministries which sprung up through Grace Brethren church planting and leadership development there in Haiti.

Through Compassion International (the ministry Dan Woolley serves with ).