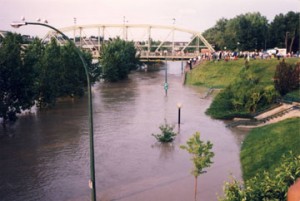 River Road is flooded in this photo from the 1995 flood in Medicine Hat. City officials are warning citizens flood levels may reach the same level in the next couple of days. Medicine Hat is home to Grasslands Church, a Grace Brethren congregation.

The city of Medicine Hat, Alberta, home of one of the newest congregations in the Fellowship of Grace Brethren Churches, Grasslands Church, is preparing for possible flooding that some have said could rival a serious flood in 1995.

“The city is ‘bracing’ for a pretty serious rise of water in the South Saskatchewan river and tributaries. Low level areas (‘the flats’) are being evacuated and sandbagged,” says Bart Blair, pastor of Grasslands Church. “From what I read/hear officials are expecting the water to reach dangerous levels by tomorrow morning. Predictions are of flooding worse than a flood in 1995 which had parts of both residential and business neighborhoods under water. The next couple of days will be pretty challenging.”

He adds that Grasslands Church has a couple of families living in areas that could be effected.

Pray for the city and the safety of the people there during this time.

“Right now we’re in a ‘wait and see’ mode,” says Bart. The cities of Calgary and Lethbridge, further up river, are already experience flooding. “We’re definitely praying that the predictions are wrong and that the water here doesn’t reach the levels being predicted. But we have had some time to get people moved and business are taking precautions.”

People in the city are in somewhat of a “panic” mode with the grocery stores being swarmed and gas station line-ups. I’m hopeful that the spirit of urgency doesn’t result in anything dumb happening.

Below is some additional coverage of the situation.